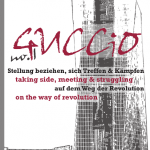 The opening of the European Central Bank in Frankfurt takes place not before early 2015 and might be delayed further. This gives all of us more time to organize and get prepared!

We are going to post any new information about dates and event here on our blog as soon as we get to know them.

Whoever has studied the methods of the IMF knows that the former are not limited to a simple “Shock Doctrine”. The strategic apparatus of the IMF and the World Bank peruses a dual function: one finds on the one hand an effectively brutalizing process of violent economic restructuration, on the other, a system of “micro-credits” that work to soften the impact of the latter, stimulating the creation of small economic units. The goal of this double movement is simple: transform everything, everywhere, into an enterprise. The oft celebrated “social economy”, the “solidarity economy”, are in no way an appropriate remedy to the “Shock Doctrine” but its effective compliment. We do not desire a better economy, be it ever so “social”, we desire the end of calculation, the end of evaluation and measure; the end of the accountant-mentality, in love as much as in the workshop. END_OF_DOCUMENT_TOKEN_TO_BE_REPLACED